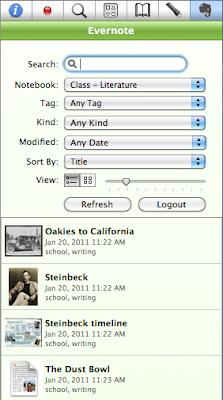 Curio 7.3's out with lots of new features, tweaks, and fixes.
First up, by very popular request, a new Evernote shelf results view. Lots (and lots and lots) of customers wanted a view which looked more like Evernote's official Mac, iPad, and iPhone clients. Ask and you shall receive.
Plus, you can still see the previous "image matrix" view if you want via the little button next to the View label.
Curio 7.3 also includes new idea space exporting options, a very slick Swap File feature (where you can swap out the underlying file tied to an asset without having to reconstruct all your asset figures scattered throughout your project), plus lots of mind map, list, table, index card, and Evernote enhancements.
Curio's autosave system has been rewritten in several key areas. It is now more robust and reliable and will even work with Untitled projects.
Oh, and for you Office 2011 users, Curio now supports mailing projects and PDFs via Outlook.
The infamous but thankfully rare body-less index card bug has been squashed.
And I finally tracked down an elusive thread-timing bug which can cause a thrown exception which, in some cases, could then cause a corrupted undo stack. Yippee!
Read the release notes, do a Check for Updates, and enjoy! :-)